Machine Head - Through the Ashes of Empires (2003) 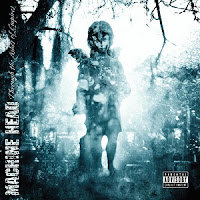 Before you've even heard a note of Through the Ashes of Empire you can already tell that some important change has been made. The title of the album is probably the best they've had, and the cover art leaves a more lasting impression with its haunting photographic effect. Perhaps some maturity has settled into this band, which had clearly not been struggling financially, but had been creatively bankrupt from the offset. After sitting through the actual content of the album, I'd concede that it's more thorough and ambitious than anything the band had released prior, with more of an ear for detail and at least some effort expended in assembling the songs together, tabulating a few more complex ideas than we'd heard from Robb Flynn across this project's backlog. All of this might seem like I'm setting up Machine Head for some glowing praise, but I assure you, I do not actually like Through the Ashes of Empire. It's not a good album, it's not even acceptable, but it's surely less shitty than the three leading up to it between 1997-2001.

Machine Head drops some of the nu metal influence (I said 'some', not all) and comes to the decision that it really misses sounding like the band it was originally created to sound like. Yes, Through the Ashes of Empires is a Pantera wannabe about 60-70% of the time. The guitar tone, and the way a lot of the riffs are structured sound like Dimebag left them on the cutting room floor during the Vulgar Display of Power sessions, with a few spare lines of other members' cocaine. Flynn's harsher vocals sound a hell of a lot like Anselmo, excepting for a different regional accent that lends a difference in natural intonation. This isn't to say that the Californians had suddenly dumped their other influences; you still get some of those childish, angry Jonathan Davis buildups, you get a lot of those ditzy little organic hip hop/Korn influences like the weird guitars in "Left Unfinished". There are some lead sequences which sound a lot like they're trying to pull a Kirk Hammett from the Black Album era, and there are still a WHOLE lot of shitty bro chorus parts which are still trying to tap into that good old All-American contemporary hard rock zeitgeist that bands like Godsmack, Creed, Silverchair, Fighters and Nickelback appeal to, or nowadays Five Finger Death Punch...

But the Pantera similarities definitely distract away from the rest, and so Through the Ashes of Empires feels like another album that was trying to be a composite of heavy music trends, playing it safe with some of the big names' inspiration entwined into the songwriting, and it just feels like they were trying to win over whatever 'metal' audience was left that looks no further than Pantera or Black Label Society when they're browsing through the record store for some new HARD SHIT. It's all dressed up pretty enough...there are lots of pinch harmonics thrown around to give the riffs a sense they have more dimension to them, or a few faster thrash parts that go more for a Cowboys From Hell vibe than Far Beyond Driven. I'd even say a few of the cooler moments on the album were some of the more unexpected, clean guitars that sadly cede to more boring groove metal riffs, or when they step outside a little further with "Elegy", which starts off with a chugging doom/sludge vibe and some more hypnotic, wasted vocals before also ruining itself. There were compulsions behind some of the ideas that end up here which were probably strong to begin with, but Robb and the boys just can't seem to stick the landing on any of them.

The lyrics are about 80% awful cliches about emotional disenfranchisement and other social issues, that like most rock is supposed to sound genuinely angry and connect with the day-to-day struggles of the mainstream rock crowd that expects little more from it, plenty of F-bombs added to create just the right blast radius of pedestrian rage. A lot of the clean chorus parts here are pretty elaborate, he was trying to stretch himself as a singer, so why then are so few of them even remotely catchy? I mean, I'll give Machine Head that this one doesn't sound so phoned-in as The More Things Change... or Supercharger, but why can't I remember a single song 15 minutes later? It's a whole lot of effort dumped into just not enough. There are single riffs on Vulgar Display of Power that are better than this entire album. There are single Vio-lence songs better than Machine Head's entire discography for that matter, but how the mighty have fallen. In the interest of fairness, I think if this had just been the album they put out after Burn My Eyes, a lot of cringe material could have been avoided, and it would seem a sensible evolution there, but that still doesn't make it an album I'd ever listen to again if I weren't committing to giving their catalog another chance.

Could it be a sign of better things to come?