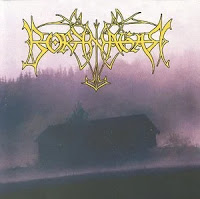 Viking/Norse metal acts might seem like a dime a dozen these days, with the subject matter so universally popular that you've got acts from many cultures using it as their lyrical inspiration, overarching concept, costume designs, and so forth. But I try to divide these into two camps. You've got the goofier, superficial stuff which is most interested in partying, singing surface level tales of the mythology, and not really integrating its cultural context into the lyrics or the actual composition of the music. This can be fun on occasion, if you just want to concede to some mug-swinging caricature and don't mind living out a little stereotype, but I'm far more interested in the bands that integrate the philosophies of the 'Viking' heritage or the humble lessons of the Eddas directly into everything from the lyrical dispositions and personal outlooks to the construction of the music itself. While they didn't exactly beat Bathory or Enslaved to the punch, I've long felt that Borknagar was one of the first to successfully pull this off,  and to this day has never really strayed too far from the path that it laid out on this eponymous 1996 debut.

To those approaching this disc from any of their modern releases, whether in the Vintersorg-fronted era, or the beautiful, blissful True North, Borknagar will seem a comparably harsh experience. When I first picked this up it was alongside the sophomore The Olden Domain, which I gravitated towards at first, due to its comparative accessibility and slightly catchier songwriting. The debut has a more scathing attack to its guitar tone, though it's just as diverse as its successor, but for whatever reason the songs just didn't gel with my brain at the time and I was only listening to it as a backup for the records that came later. Decades on, I've certainly warmed to this one a lot, it's well ahead of its time and already encapsulates so much of the musical DNA to what has long been one of the most reliable and legendary bands in my entire collection. That's not to say it's perfect, but what is most striking about the album is just how different it sounded to so many of its Scandinavian peers. There's a brightness, a melancholic desperation to Øystein's chord-streaming here that was truly rare, only the Enslaved album Frost even came close, but even as much as I LOVE that album, some of the riff patterns seemed slightly more conventional to the black metal fundamentals that were already in place back in the early to mid 90s. This band was writing almost a 'new metal language', if that makes sense, the way only groups like Voivod, Slayer or the like accomplished through the prior decade.

There is some precedent, of course, that being Bathory's awe-inspiring Blood Fire Death record, which certain segments of Borknagar seem to pay conscious tribute to, as in the warlike, steady row of "Krigsstev" with its somber chants and martial percussion. However, there are many more layers being added to this record, such as the glinting, beautiful acoustic guitars engraved into a number of the tracks, those hillside-echoed chanted choirs, and the very core of how the guitars are written. It doesn't hurt that the lineup on this is astounding. Garm (aka Kristoffer Rygg) provided the nasty black metal snarls here, and it's one of my favorite of his performances, alongside the older, harsher Ulver material, with some wicked, mocking higher pitches he throws into some of his lines to give them a lot of personality as opposed to other new black metal vocalists arriving at the time who were taking that style and transforming it into something banal and monotonous. His burly chanting was also important in how it would set up I.C.S. Vortex's style going forward, and how a lot of other bands would also approach their own vocals. Infernus, later of Gorgoroth, played some awesome bass grooves on this album that also deserve mention, as this was another difference between this band and a lot of its peers. Ivar of Enslaved contributed keyboards, which could vary from the pompous pianos and martial orchestration of the instrumental "Tanker mot tind (Kvelding)" to the eerier, woodwind pads laid out over some of the darker metallic fare.

There is a point near the midst of this album where it just becomes one of my favorite things ever, so much that the earlier tunes (including that aforementioned instrumental) seem a little trite by comparison. I'm speaking of the "Krigsttev"/"Dauden"/"Grimskalle trell" trifecta which is among the most immersive, varied and impressive Borknagar material. Somber and soaring, sullen and powerful, an impressive send-up to that 1988-90 Bathory influence. This brilliance subsides a little with the following instrumental, "Nord naagauk", and that's a complaint I might have with the album in general...half of the ten tracks are instrumental, and while they sound thematic, some of the background sampling sounds too shoddy, and the composition feels a bit sporadic, too busy to balance against the surging metal tracks. I also found the rhythm guitar tone on the album a little grainy in its saturation, which was probably my earliest obstacle. These days I don't mind it so much, and it does work well to contrast the more broad, glorious synthesizers and clean vocals, but I think with the debut in general you could tell there were a few production kinks to work out. Apart from those quips, though, this is still a timeless sort of experience, one that will row you over swell in a cold storm if you just lose yourself to its mesmerizing show of force, whether you speak its language or not.