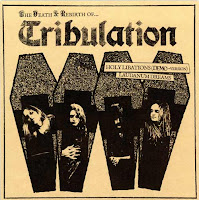 I'm actually coming at this single in reverse order here, having already been exposed to the demo version of "Holy Libations" as it appeared on the band's Melancholia EP one year later. To briefly reiterate, I found it and the other demo recordings there to be roughly on par with the versions on Children of the Night, slightly less polished and fractionally more passionate due to the mix, but not enough that I'd switch over to them rather than just run through the entire album. For this single though, it definitely seems as if it would be hurried out the door just to have something ready for the band's installed audience, perhaps even a 'shot across the bow' for those who might not have been anticipating their transformation from the progressive death of Formulas to the more sultry and melancholic Children. To that extent, it serves its purpose, with this memorable, morose tune the vanguard, and the bonus that it's a limited press 7" collector's item.

But for those not interested in such baubles, fear not, because the B-side, the reason I was actually interested in checking this single out, is also available on several of the full-length presses, only somehow not on the one I originally covered, because fuck my life. "Laudanum Dreams" was the real attraction for me, and I was not in the slight bit disappointed, since it's a driving, solemn and vicious piece rife with thundering fills, walls of chords, and threads of melodic tremolo picked lines which almost create a mid-90s, mid-paced melodic black metal feel, and the brazen, shining 'chorus' of the guitars is well worth the investment, along with its overall triumphant aesthetic blow the torn throat roar of Johannes Andersson. Cool band pic, too, in coffin shapes on the cover, a Gothic noir sort of 'teaser' in the title as to their style change. Ultimately, you just want to track down a version of the full-length that includes "Laudanum Dreams", and if you need experience the demo mixes then go for Melancholia upon which there are more than them. So I can't stack praise on this, only that it's got a good B-side which is album worthy.

Verdict: Indifference [5.25/10] (Precedence is given to the dreamer)