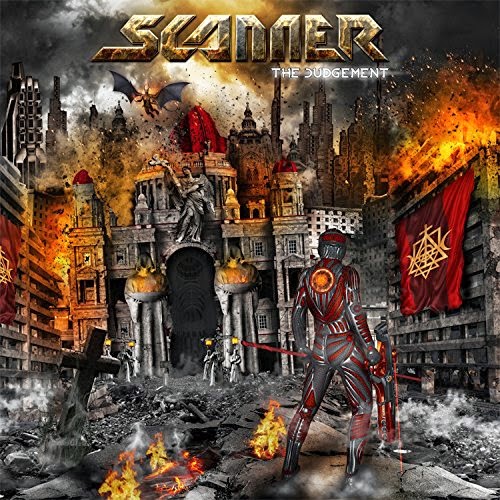 It's been 13 years since Scantropolis, and while many who had a negative reaction to that record might feel this absence was likely for the best, I didn't find that album quite as much of a stain on the Scanner legacy. Sure, it was an extremely accessible, almost AOR style of hard rock/metal with but few traces of what made the band so great in the 80s, yet there were certainly a few strong riffs and chorus sequences there that had me spinning it a few times. Well, these days, Axel Julius has put together a fairly new lineup, none of whom have appeared on a prior Scanner record, and done a bit of a 180 degree turn from Scantropolis, in that this is an earnest attempt to return to the roots of what made the first two albums so special, while not entirely abandoning the more contemporary progressions they were making on Mental Reservation or Ball of the Damned in the 90s. It's a midlife sort of crisis effort that might have come too late, but I can't say I'm entirely disappointed that it has come at all...

Almost immediately (after an intro) you're dialed back to the frenetic power/speed metal guitars that placed Scanner on the map alongside their countrymen Rage, and introduced to the new vocalist Efthimios Ioannidis, who performs with a less-shrieking, more controlled mid range thank you'd expect on a time machine album like this. He occasionally shifts up the scales, for a few frilly Halford-meets-Henning Basse, high-pitched lines, but he simply doesn't excel at that uncontrolled, explosive scream which characterized the band's classics, and dwells more in an area that Peavey Wagner has been rather comfortable with ever since HIS band abandoned their 80s volatility for maturation, at the expense of momentum. In fact, some tunes here like "Nevermore" felt almost like an analog for that guy, with a few James Rivera-like barks ("Warlord") thrown in for good measure, and plenty of versatility, even when he hurls out a low, guttural growl. He has some character, but for whatever reason there are just too few choruses or individual lines that 'nail' something memorable, and in the end it seems as if the writing itself holds him back from really busting a nut in your earspace.

The rhythm guitars are tinged with a number of small, interesting melodies that lend a little more compulsion to the chord patterns, but I have to say that about half the guitar riffs on the disc are quite predictable, typical connect-the-dots second-tier Euro power which relies far too much on the upper strata of atmosphere that the vocals and harmonies just can't pull off. Now, some would say that these guys were always on that level, but there was something so impactful, so crystalline, so off the hook about Hypertrace and Terminal Earth that I still spin them both today and they haven't aged at all, while I struggle to retain The Judgement even after a few hours. The overall performances here are consistent and solid, and Julius still has an ear for a melody that elevates most of the tunes above the level of boring mediocrity, but it wasn't until "The Judgement" itself that I really started to bang my head and pretend I was listening to a successful Scanner album; it builds into a pretty potent Euro power metal anthem circa Gamma Ray, but still lacks a chorus that will floor you. "Battle of Poseidon" and "Pirates" are also decent, the latter having some of those gang shouts you might remember on the first album; and the closing pair of "The Race" and "The Legionary" are likewise highlights, most of these having a fairly immediate and bracing atmosphere.

In the end, though, all of the components of the band simply don't gel together. When the guitars are going strong, you haven't got great vocal lines. When the drums are battering away with a fervor, the chorus just never hits that interesting, unexpected string of notes that you'll be singing to yourself for the next 25-30 years. Is The Judgement a worthy wayback machine to when Scanner was one of the most promising lesser known acts on the impeccable Noise Records roster? Perhaps, but what it does possess in spirit, it somewhat lacks in actual songwriting quality. Competent power metal which does service to the dystopian and science-fiction atmospheres the band was always so swathed in over the decades, but not the killer comeback I'd have hoped. Hell, for all its flaws, I think at least the first two cuts on Scantropolis were more memorable than these. Having said that, this is very far from a bad album, or even much of a letdown. The lineup is tight and capable, and now that this one is under their collective belts, I wouldn't put it past them to dig into whatever asteroid field they reside, mine for some even better material, and go streaking back across the universe.