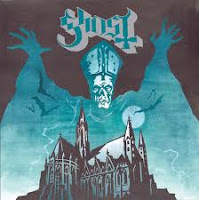 Many arguments have been made for and against Sweden's latest metallic superstar Ghost, but there is no denying that they place a rather refreshing spin on the re-risen popularity of traditional doom and heavy metal by refining it with a tinge of 70s pop rock influence, in particular the faux occult stylings of artists like Black Widow or the late 60s Coven. In fact, I've gotten more requests to review their full-length debut Opus Eponymous than any other album in memory, and while I'm a year late, its hour has come at last. One might describe their sound as a hybrid of Blue Öyster Cult and Mercyful Fate and not be far off the mark, with the clean, psychedelic rocking atmosphere of the former and the piercing vocals and rusted metallic grime of the latter, even if Papa Emeritus doesn't utilize anything near the shrill falsetto of the King himself, nor his decrepit narrative mids.

Where the album really works is in its layered use of melody through both the primary and backup vocals to create a soothing, almost 60s vibe you don't often hear on the heavier end of the rock spectrum. The guitars are incredibly clean, given only the slightest tinge of distortion, and yet they're still loaded with riffs. Naturally, as you might expect of any band whose stage attire includes ominous robes and a cardinals' attire, there are going to be pipe organs, and they are used sparsely and effectively to offset the leads and rhythms. Other tricks include monk chanting ("Con Clavi Con Dio"), Sabbath-like doom breaks ("Death Knell"), or Zombi styled progressive instrumental bits ("Genesis"), but I personally found the band to be at their best when they were just rocking along with their cheesy, Satanic lyrics and fine if understated guitar licks; cult/camp horror underpinnings are cruise control for retro-ghouls.

There are songs here which frankly kill, and then others which, while consistent with their betters, don't build up the same quality of melodic vocal lines or chorus segments. "Con Clavi Con Dio" does wonders to set the stage for the heavy rock equivalent of a Hammer Horror film, with its dark, ghostly lyrical meter and chantings. "Ritual" is an obvious standout for its great chorus and surefooted mid-paced verses. "Elizabeth" flourishes for the speedier licks in the verse and another unforgettable haunted house chorus. "Prime Mover" was another successful piece for its layered, Pink Floyd-ish vocals and pipes. But then there are pieces like "Stand By Him" which feels primarily like a retread of "Ritual", or "Satan Prayer" which seems throwaway apart from a few of the vocal lines. Opus Eponymous clearly hits its target more often than its misses, but it would be dishonest for me to claim it's the masterpiece some have made out.

While the utter polish of the production gives it that nostalgic appeal for 60s/70s pop that the band were no doubt going for, I feel that the lead vocal lines often come out a bit wimpy. Part of this might be Papa's accent, but I'd like to hear him mix in some more lower range passages to give it a better balance. Also, the songwriting could use a spike more variation to capture the breadth of the spooky subject matter. A bunch of samey paced and plotted hymns to the devil seem safe enough for the debut album, but they might inevitable bore the Old Goat if the Swedes can't stretch themselves. Those gripes aside, though, I have certainly had fun with the album enough that it's gotten a few dozen rotations over the past year, and they've got plenty enough of a future ahead of them that their style could damn well explode beyond the 'what's old is new again' aesthetic hanging so heavily from its cobwebbed rafters.