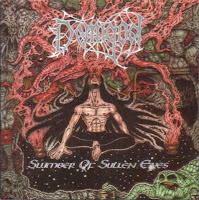 Along with the similarly-named Demilich, Demigod represent exactly 1/2 of the best Finnish death output of the 90s. Slumber of Sullen Eyes is an album of remarkable depth for 1992, incorporating somber melodies and atmosphere into its base brutality. This band has never disappointed me, but I still identify most strongly with their roots, fusing deep, Floridian-influenced death metal grooves with cosmic and mystical themes.

A brief intro erupts into the searing "As I Behold I Despise", with a basic if killer riff transforming into a groove reminiscent of Bolt Thrower. Of note is the lengthy bridge segment where the bands becomes highly atmospheric, adding melodies and tasteful leads. "Dead Soul" crushes with a thrashing low-end riff over steady double bass rhythms, again the groove recalls early Bolt Thrower (and maybe a little Dismember on this tune) but capitalized on its use of leads to create a progressive edge for its day. "The Forlorn" opens with an excellent riff, dual guitar harmonies creating a classic death hammering which alternates with a shifting groove. "Tears of God" is a death/doom piece with scarce use of synths to add a layer of atmosphere above its tireless and frightening groove and step. The title track has an air of Pestilence in its chords and composition, one of the most enduring tracks on this release. The remainder of the tracks are all good, with special attention to the bass strumming of "Fear Obscures from Within" and the excellent descending rhythm of "Towards the Shrouded Infinity".

One gets the feeling listening to Slumber of Sullen Eyes that it was very much ahead of its time. While it's not an entirely unique experience, it does use its own influences to set the stage for much to come over the next decade. Brutal and percussive, there was plenty to appeal towards the pit population, yet the material is much deeper. Finland never developed a death metal scene in the 90s to rival that of neighbors Sweden, but Demigod was certainly worthy, and they remain so even if we don't hear from them as often as we might like.