Orloff - Apparitions Among the Graveyard Skies (2012) 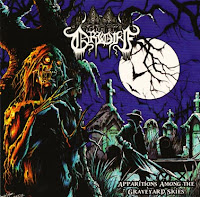 Orloff is one of numerous projects involving Vanessa Nocera of Razorback Records, known here as 'Alucarda Bellows', and right up front there looked to be so much I was going to dig about this sole full-length, Apparitions Among the Graveyard Skies. The cover artwork is excellent, comic-book style and eerily evocative. The band's logo is great. Even reading through the lyrics, I'd have to say almost all of them are decently written, fully entrenched in the cult horror that is explored throughout much of the Razorback roster. I will even go so far as to say that the initial listening impressions had me hopeful...haunting organs cede to dingy death metal just slathered in dire melodies and even some shredding lead in the first metal tune "Cobwebbed and Decayed".

Unfortunately, Orloff really puts its best foot...fang? forward, because Apparitions feels like a whole slew of ideas programmed together into a 50 minute horror-trip, with little regard for whether they really fit or not, or to any consistency of quality. The transitions are almost universally weak. A lead or an organ section will arrive and depart with haste, like miniature interludes, only badly edited so they don't really deliver much of an impact, and just feel like they've been cobbled together from a bunch of riff ideas that were stored on a hard drive. The shredding parts are a mix of coherent and too short, or sloppy and uninteresting, where the rhythm guitars are also a mixed bag...ranging from evil, inspired vintage death/doom metal ("Nine Eternities in Doom") to the offensively banal chugging of "House Where the Beast Dwells", to "The Needful Revenge of Arthur Grimdsyke" which sounds like a pure, derivative heavy metal song with growling attached to it.

Some of the beats and fills are incredible, where in other places they feel like they're going to collapse in on themselves. Bass lines don't seem to serve much of a purpose to the music, apart from just a bulkier bottom end for the other guitars. In addition to the aforementioned organs, there are some more acidic synthesizer lines which sound like they could come from a giallo flick, only they're not very well implemented in the places they show up. Orloff also uses a few acoustic, classically styled guitar parts, which actually work out well on the instrumental title track, but feel a little jarring and wedged in elsewhere. The majority vocals are brutish and deeply guttural, while some higher pitched snarls are added in for contrast, but in either case, while they're a good fit for this style, they don't always bark out the most interesting syllabic patterns over the riffs churning out beneath them.

I'm not fully aware of the seriousness of the project, since after one demo and this album it seems to have vanished, but Apparitions Among the Graveyard Skies ultimately suffers from shoving together too many ideas which needed further gestation. Take out some of the dumber riffs that spoil it for the rest, align some of those beats and vocals a little better, and spend a long time fixing transitions, and you'd have yourself a pretty kick-ass Halloween/horror record. But as it stands, once you hit the waning moments of the album, it almost feels like the band is just as through with it as you are. Not a terrible album, just a lot of missed potential.