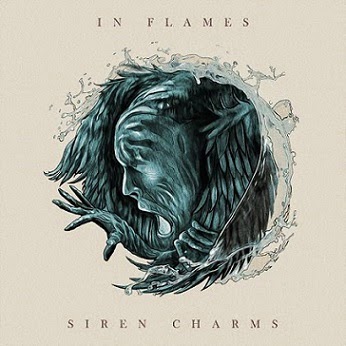 It's never easy when listening to an aberration like Siren Charms to admit to oneself: 'This band meant something to me once'. But I'd be lying to say they didn't, because for at least the first half of their career they were churning out a very strong case for the melodic death metal archetype as a whole, and in particular The Jester Race remains for me an obvious go-to album whenever I'm craving some guitar-driven, melodic, inspirational bliss. And, to some degree, they have morphed into one of those bands I have so much history with that I probably will never 'ignore' one of their new records outright, clinging to the faint hope that they might one day rekindle the strength and momentum of the songwriting that used to define them. Once in awhile, they will still surprise me, as they did on A Sense of Purpose in 2008, the one album they've released past the turn of the century which I have actually enjoyed. Modern and 'emo', with a little groove, sure...but packed with great In Flames riffs and a few tunes (like "Alias") that I daresay were unique enough that you're likely never going to hear them anywhere else.

But since that point...six years of steady declination, first with Sounds of a Playground Fading, a watered down and 'safer' alternative to A Sense of Purpose (which was already plenty accessible and kid friendly with the Korn-like artwork), and now with Siren Charms, as structured a squamous midlife crisis turd as they've ever escorted out the studio doors, and I'd be hard pressed to think of a past album I enjoyed less...maybe Soundtrack to Your Escape, or Come Clarity, but I'd have to go back and re-listen to them, and after forcing myself through THIS a requisite third time (with alcohol stirred into my coffee), the mood does not strike me to do so. Siren Charms is a record that not only gives credibility to the voices that have been shouting down this band for whatever reason (changes in sound, general visibility and appeal), but compounds their complaints by channeling some of the most shallow, redundant grooves and banal plastic pop-rock oriented songwriting you've ever heard outside fucking Abba (who are exponentially better than this on a bad day). Disclaimer: I have no problem with a band evolving or devolving its sound in whatever direction. If In Flames put out a record that sounded like Seven and the Ragged Tiger, or Thriller, and it was GOOD, then I would be the first on board and let the naysayers choke on my exhaust.

This is not good.

UN-good. You keep waiting for the money shot and it stays softcore, with your eyes affixed on its shaved bottom as it thrusts halfheartedly for the camera crew. Let me slightly abridge that...there are two, possibly three minor 'positives' to the experience. The electronics used throughout the disc, like in the intro to opener "In Plain View", gave me the false impression that the album might explore the sort of retro future synth stuff that I've been heavily into lately, which I admit might be a pretty cool blend with some solid melodeath riffing (bands have done synth stuff in this niche before, but not quite in the way I'm picturing). Where these lines appear, they're sort of cool, but there just aren't enough of them to feel like it's a fully realized idea, they are simply intros or distractions. Secondly, as much as I'm not interested in hearing Anders' whining, cleaner vocals, he has actually succeeded here in smoothing over his pitch and delivery so they don't feel quite so ragged and screamy as they have since Reroute to Remain where he started leaning in this direction. I'm just saying, if N'Flames was truly to become N'Sync, now he just needs the dance moves, because he could get by on his voice with the support of another four boys. Finally, there are a handful (less than a handful) of riff passages on the disc that don't deserve my complete loathing, because they approach A Sense of Purpose levels of memorability at the very least, with that same style of processed nu-thrash.

Otherwise, the album is one for the dogs. The band spends so much time trying to build a strong chorus that they can barely stick one...even on a tune like "Through Oblivion" where it does carry some emotional poignancy but it always feels half-formed, like they were going to induce another melody or twist in there and it just doesn't happen. There is far, far too much fucking restraint on this album, to the extent that I almost found myself pleading for Anders to RETURN to that dirty and whiny voice, only because it felt more passionate. This just feels heavily overdubbed, punched in laconically in-studio and generally scrapped together, whether it's the vocal placement or the riffs, a few of which have nice, gently layered harmonies in a cubicle, corporate pop metal sens. There are some tracks like "With Eyes Wide Open" which are downright embarrassing, like they were trying to write material for a long lost Boston album for the ladies and the lighters. And without exception the groove/nu metal riffing substrate is lamentably bad, without even an inkling of a stylish idea or a pattern of chords that at least makes you want to genuinely shake your ass.

Some will take exception as always to the tidy, mechanized production values, but that is the least of the issues with this disc. The cover artwork: bland. The female guest vocals on "When the World Explodes": ridiculous, making it sound like a throwaway Epica/Nightwish/Within Temptation crossover. Who-cares bass-lines and paint-by-numbers metalcore chug-downs. The lyrics are generally very ambiguous accessible emotional crap like 'In the darkest of nights/you are my endless fire inside' or 'Where I have nothing/there's no hate/room to breathe/no envy and nothing to lose'...a bunch of nonsense that the guy will claim is very 'personal' and 'self-affirmation' oriented but was probably written lazily on a napkin at some restaurant on tour. Song titles are almost unanimously cliches that have been done so many times before (with the exception of "Siren Charms" itself), and at its very best, they've only got tunes on this that are 1/4th of what a good modern In Flames track should incorporate. Even if we ignore the band they used to be, when they were constantly on the upswing career-wise, and pretend they formed up in 2001, there are infinitely better songs on Reroute to Remain or A Sense of Purpose. Even the last full-length was an order of magnitude superior and I struggled to remember many of the specifics 15 minutes of hearing them...

I understand Fridén is probably venting his anger that he's not in Killswitch Engage or Ariana Grande's dance partner or something, but I just can't understand how members like Gelotte and Iwers let themselves be continuously booked a berth on this sinking ship. Are the paychecks really all that fat? Perhaps at the next 'minutes in the meeting of the hiveminds of In Flames' the two of you can just get up and each kick Anders in one of his balls, though I have my doubts they are still in place, and put out a proper fucking metal album again with blazing, inspirational harmonies, savage words and riffs that get the heads banging. This album has no heads banging, in any sense of the phrase... impotent, joyless major label tripe that deserves all the excrement foisted upon it. Despite what I said in the opening paragraph, I'm going to have a hard time justifying any curiosity for what comes next.