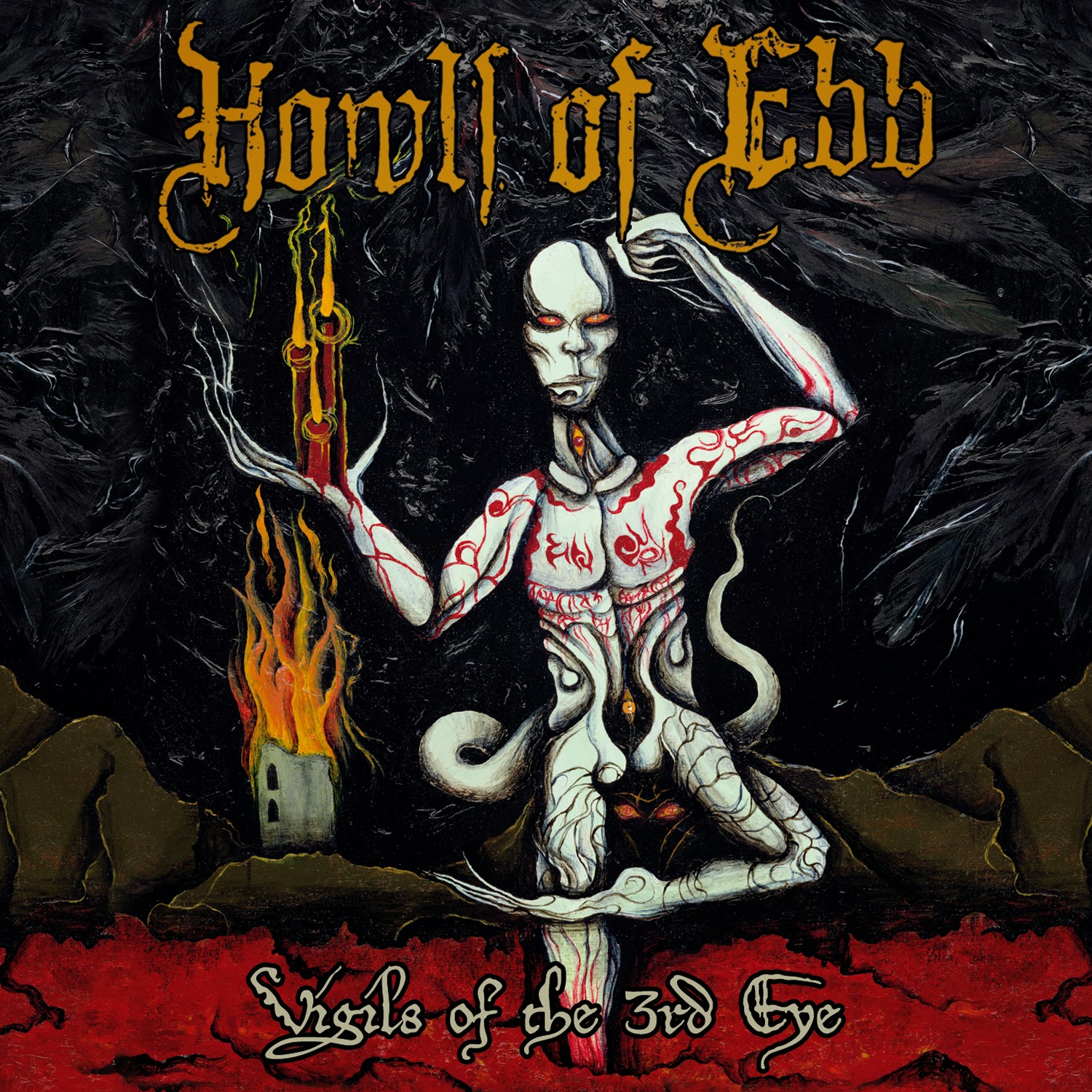 One surefire method to reduce your chances at getting lost among the sheep of the 'retro death metal' movement: re-invent the stuff, return to what first struck your fancy about the style and then scrawl your own alternate manifestation of the medium into being. Howls of Ebb is not the first, and won't be the last to take such an approach, and naturally there is no means to guarantee its 100% uniqueness, but this is one of a precious few death metal records I've heard lately where the immediate reaction wasn't to compare it to album A by artists B and C. Yeah, if you stop to think of it for awhile, your memory might drift back to other examples of comparable vocals or guitar stylings, usually on the 'fringe' of the genre, but Vigils of the 3rd Eye nonetheless is a fresh invigoration which takes a few liberties with the form while retaining the morbid, unnerving narrative of extreme metal.

First and foremost, this is just a collection of more organic sounds than you're likely comfortable with in a market saturated with thickly distorted, raw guitars or clinically polished technical wanking. Howls employs a cleaner tone throughout, whether that be on the tremolo picked patterns, dissonant chord abuse or all the jangling, sporadic insanity playing out in the background of a tune like "The Arc. The Vine. The Blight." It's almost like opening the rehearsal room doors between a methodic, meticulous death metal band and a bunch of guys fucking around in some sort of progressive post-hardcore aesthetic, and then recording how they play off one another in a contrast of chaos and control. Some inspiration has clearly drifted over here from creator Patrick's other project, Trillion Red which had a unique spin on progressive rock with metallic underpinnings; and I also might describe this as Gorguts' Obscura if it were produced by jam rockers in Nashville...which probably makes no sense to anyone but myself, but that's the strength of Vigils of the 3rd Eye...it's so uncanny and open to interpretation that few individuals will come out of it feeling the same.

Not all is heavy and harmful here, because there are a number of spacier ambient guitar interludes and sparser, disjointed riff passages that I could only liken to bizarre groups like Sleepytime Gorilla Museum or The Book of Knots; these are crucial to how the album pans out as a whole, giving the listener a brief but 'unsafe' respite between periods of madness. A great example is how that wailing guitar in the title track sets up the broken, harder guitars and eventually gallop into thundering catharsis. Vocals are a dour guttural which teeters between the traditional black and death metal techniques, but is often paced with more of a spoken word, narrative syllabic structure than just straight lines delivered over riff measures. The drums and plodding bass lines are airy and natural and contribute fully to the naturalistic feel of the recording as a whole, though they're obviously a little more vacuous in terms of inventiveness when matched against the guitars. But despite the relative 'looseness' of how Howls of Ebb conceives its materials, as sandboxes in which to play about in rather than rigid constructs, there is a glaring cohesion to the experience which seems to slap the listener around a little over the first few tracks, and then erupt into a creative climax with the last 20-ish moments: "Illucid Illuminati of the Dark" and "The Devious Nectar" which will fuck your head right off its stump...

Sound intriguing? Well it is, and Vigils of the 3rd Eye is without question one of the more curious death metal concoctions you're like to hear amongst the faceless legions of cavern core aspirants and classic Swedish cut & paste that is flooding the market to a state of overflow. The most accurate I might describe it is as a median between the fragmented nightmarescapes of Ævangelist and the springy gloom of Arizona's TOAD, but there's a lot of space in there for Howls of Ebb to splash around in, and though this isn't the most obsessively immortal, catchy thing I've heard lately, anyone who can crack his/her skull open long enough to let it properly seep in will appreciate its instinctive, eclectic, alien and atmospheric textures.