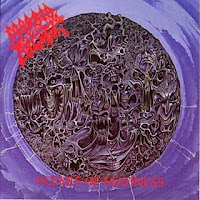 Truly a tyrannosaur of the death metal realm, Altars of Madness remains one of the most important and infectious statements in all the genre's history, so brilliantly crafted that even its creators have not been able to surpass it in all their future experimentation and expansion. While most of the formative bands in the style would cross the bridge from thrash to its more extreme offspring, Morbid Angel decided to hang out below said bridge and exact a gruesome toll from all of the audience following in their wake. That this is an immensely influential work goes without saying. Probably 50% or more of all black, death and high velocity thrash I've heard in the past 20 years (and I've heard a LOT of it) owes it at least a salute in passing, if not a more substantial expiation like a handjob.

That said, Altars of Madness is not necessarily an innovation on the aggressive advancements of the 80s as it is a meticulous escalation of such virtues. Surely you will hear the taint of Slayer, Dark Angel, Kreator, Possessed and other monstrosities within its folds, ramped up to nigh impossible levels of malevolence through the unflinching occult lyricism. Pete Sandoval was a living storm and an obvious successor to the recently acquired drum throne of Gene Hoglan. Trey Azagthoth channeled Hanneman and King into a writhing vipers' nest of acrobatic ideas, producing such a force in tandem with Sandoval that half the album sounds like a cacophony of invisible hammers beating in your ribs. David Vincent would not necessarily adopt the same, guttural demesne of a John Tardy or Chuck Schuldiner, but instead a harsher, barked evolution of the more intense vocalists in thrash metal, possessed of perfect resonance through its start contrast against the brighter, scintillating evil of the guitar rhythms and just the right amount of reverb. This is the best Tom Morris (Morrissound) mix ever, and hell, even artist Dan Seagrave got in on the deal, creating one of the most iconic and beloved cover images of his career.

This would all mean jack shit if the songs didn't live up the hype, and with one possible exception, they not only measure up to it, but trample you with their brilliance. "Immortal Rites" paves the ghastly path with its infamous reversed guitar intro, colossal drum performance and more curving, squealing and flesh carving riffs than you could initially count. Not to mention the highly atmospheric breakdown around 2:00, with the slower but still precision chopping and the trill of its synthesized heraldry. 'Lords of death I summon thee!' Who could forget this? "Suffocation" attempts to beat the memory straight out of you with malignant levees of staggering brutality, alternating smooth currents of carnage in the verses to the splattering eruption of the leads and that amazing, descending passage around 1:50. Then, "Visions from the Darkside" explodes with what by this point is the most accessible, 'catchy' structure on the album, from the baleful razor bliss of the dual melody (:20) to the almost happy grooves inherent in the verse. Attention should be spent here on Vincent's bass lines, which are incredibly fluent as they twist below Trey's juggernaut exhibitions.

"Maze of Torment" opens with shrill gutter force, almost like old Death Angel circa The Ultra Violence but quickly transforming into a neck battered onslaught of perplexing rhythmic thrust that evokes imagery of seraphim being delivered multiple stabbed wounds. "Lord of All Fevers and Plague", which was exclusive to the CD version (back then you were given more for paying more) is a slicing addition with entropic leads and grisly gallantry, but then we arrive at what I must consider the apex of the experience: "Chapel of Ghouls". This is an exercise in not only intensity via Azagthoth and concrete jointwork via Sandoval, but arching and ebbing patterns of disgust that incessantly tear through the listener at unfriendly velocity before the magnificent breakdown before 2:00 with its epic, haunting keyboard line. The gates of the old chapel burst asunder, its contents spill forth into the cold night mist, rampaging silently through the sepulcher before they sate their undead hunger on the nearest village of unsuspecting living. Surely this is one of the greatest moments in all of death metal!

The final third of the album is the only place where a chink in its armor is exposed, coming with the perhaps all too straightforward "Bleed for the Devil". Don't get me wrong, this is one hectic storm of savagery that will peel the paint of artillery as surely as a nuclear wind, but despite the dizzying lead breaks and virulent speed, there was just something missing in there. It's the only reason I don't award the album a perfect score. "Damnation" is immediately more interesting with its guillotine curvature, and "Blasphemy" spits forth frag grenades of concussion through the flange effect nestled into its earlier verse, and the morbid death hymns of the bridge. Lastly comes "Evil Spells", possessed of incredibly memorable guitar rhythms, lead spatter and just about everything you liked about its predecessors, a summation of sin and scourge. The CD version also includes some alternate solo remixes of "Maze of Torment", "Chapel of Ghouls" and "Blasphemy", meant only as an addendum, and thus they don't detract from the appreciation despite the obvious redundancy.

The Morbid Angel debut felt like one of those moments where some gate to cosmic horror had just opened and there was not going to be any way to close the rend. In fact, the band's obsession with the Lovecraftian Mythos, Satanism and archaic occult ritual seems to reflect this. The lyrics rule. It's one of those precise occasions of singularity in which you know the game has changed forever. Such a defined, developed work of craftsmanship that one can be assured that the years leading up to its release were well spent. This was pretty much an instant breakout hit for Earache. I was already seeing the band's name dropped everywhere before it was even released, and even more so as the t-shirts began to infest the chests of every sick fuck from here to Timbuktu. But not often was the hype this well deserved. Morbid Angel wasted no effort in writing and executing this material, and you should spare none in tracking it down immediately if you are one of a handful of blessed ignorami who have yet failed to do so. Fundamental, and so near perfection to my ears that its successors couldn't help but breed disappointment.