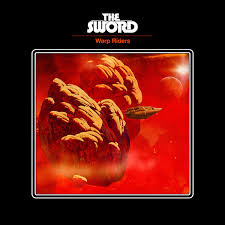 Warp Riders is the third album from the Austin, Texas based band The Sword. While they fit comfortably into a stoner metal framework with fantasy based lyrics in the past, The Sword have evolved their sound with a fuller and heavier production. This time out they are less Sleep and more Metallica, while still retaining the ever present Black Sabbath influence. I found the evolution in sound to be successful and the album very rewarding.

Lyrically Warp Riders is based on a science fiction concept wherein a traveler encounters all manner of familiar sci-fi characters like time wizards and space pirates. It's pulpy and while it may not be the most original story, the lyrics are very catchy and interesting. The Sword don't stray too far from their origins because this certainly isn't hard science fiction by any means. For example the second track "Tres Brujas" covers the familiar fantasy trope of the three witches, which they have sung about in the past.

Three witches you shall meet
upon the path to your fate
The first will love you,
the second will deceive you,
and the third will show you the way

This isn't terribly original, but they put their own spin on the concept and breathe some fresh air into it. Their vision of the future includes magic potions, fate and the sleazy streets of "Night City." Not the sparkling sheen of 2009s Star Trek, but the barren wastelands found in either Alien movie.

Musically, the album opens with a fuzzy and dissonant sound that fades to a series of Metallica inspired riffs. They follow a number of thrash cues, although not at those speeds. Three quarters of the way into song they break out a quick riff built on pull-offs that sounds straight out of "The Frayed Ends of Sanity" from ...And Justice for All.

The intro to "Lawless Lands" reminded me instantly of the Ram Jam classic "Black Betty" with its bass drum intro giving way to a solitary guitar lick. Whether it was intentional or not, that southern rock swagger is the album's second major influence, evident also when the guitars break into a Lynyrd Skynyrd-like solo in "The Chronomancer I: Hubris."

An instant highlight from the album is "Night City." The opening shreds then falls away to a hard rock riff. The song recounts the scum that live there and includes one of the best choruses on the album.

The album finishes strongly with "(The Night and the Sky Cried) Tears of Fire." Heavy sliding power chord riffs abound here, accompanied by solos with a great airy tone, hovering above the fuzzy earthiness of the rhythms.

I couldn't help but think Warp Riders is what Metallica wanted to do in the 90s when they came up with the Load albums instead. Thrashy hammer-on riffs settle in between southern rock swagger, while J.D. Cronise's voice still retains that echo-y early Ozzy Osbourne quality. Through and through Warp Riders is solid American heavy metal.