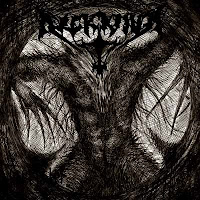 Perhaps the greatest thrill of writing music reviews is when a band you've long considered decent, but lacking that extra 'something', suddenly knocks it out of the fucking park. This is one of those rare moments, because ÞÞÞÞÞÞÞÞÞÞÞ absolutely crushes, obliterating all the band's prior works and nearly every other black metal release I've heard already this year. The album sounds superb, the songs furious with a primitive power that is sheer hypnosis.

Arckanum are one of the earliest Swedish black metal acts, with no shortage of decent and interesting releases to their name (Fran Marder and Kostogher in particular were pretty good), but I was in no way prepared for this. Shamaatae has trumped himself. "Þórhati" unleashes a divebombing volley of rugged chords, almost like sawing dried autumn wood with a scythe, while the verse builds into the perfect yet simple chorus shout. "Þann Svartís" features a glorious embrace of driving black rhythm, a spark of desolate longing caged within the savage melody. "Þyrpas Ulfar" bursts once more from the bleeding womb of the Earth, its rhythm both impossibly simple and powerful. This is black metal! The melodic black that Sweden has always taken great pride in, from the Dissections to the Marduks. Add to that the primitive roots of Arckanum's past and you've got an album truly worthwhile. The consistency of these 11 tracks is as reliable as the character beginning each songtitle. Not a weak moment to be had, but I'd direct you to the brief ringing instrumental riffs of "Þyrstr", the punishing sadness of "Þjóbaugvittr", and the repressed, murky, treacherous tones of "Þá Kómu Niflstormum".

Again, I must mention how important the mix to this album is in its overall effectiveness. This is the perfect sound, straightforward and powerful yet clinging just enough to the tonal atrophy of the majority of the 'basement' scene (and Arckanum's previous releases). The drums and bass plod like thunder beneath the endless battery of grim, warlike chords. Upon listening to this I am instantly transplanted to black and white fields of carrion, the worship of faiths best left forgotten drilled into the psyche through the repetition of but a few notes. Shamaatae's vocals wretch forth labored poems of gnostic entropy. Backing effects of thunder and echo, etc, are placed perfectly through the tracks, each a queue to re-captivate the listener should he/she stray for one second.

ÞÞÞÞÞÞÞÞÞÞÞ deserves only the highest accolades, a very likely candidate for my own end of the year list and probably the best Swedish black metal I've heard since Mörk Gryning decided to call it quits. A Soundtrack to Wintry Death of the Worlds indeed! Hail.

Yes yes yes. This album was like ordering a burger and getting a Kobe steak.

I've been looking forward to this record more than any other this year. Can't wait to hear it.