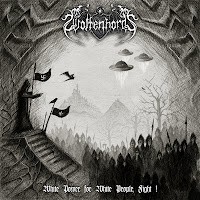 This is the third album from one man Croatian band Wolfenhords. 'The Nobll' handles all the instruments, lyrics and vocals. And if you couldn't already tell from the hilarious album title, this is NSBM with a heavy emphasis on white nationalist politics and Aryan ideology. The band is also quite anti-Christian. If any of these things bother you, skip this review and move on to another!

As for the music, it's simple black metal with a rock and roll influence, and I happen to really enjoy it. You'll also hear a bit of a folk metal edge, as well as some punkish black metal parts. The Nobll's vocals are very loud and forward in the mix, dowsed heavily in reverb, but I also enjoy them. There are 15 tracks here including intros. After a sampled classical intro, "Iskra Zla" begins with atmospheric percussion and eventually turns into a simplistic yet effective, doomy pagan black metal song. "Zemljo Pagana" has another very simple beat and riff driving it, but the vocals really carry it over the top, transforming it into an Aryan anthem. "Paljevinski Grobov" starts with a catchy folk atmosphere. Other strong tracks include "Vanishing Shadows", "Daylight Gone" and the old school metal of "Deathcraft".

For the squeamish and politically correct, the lyrics for the band will be the clear point of contention. Some of them are actually in English. The lyrical themes seem to portray a very futuristic form of nationalism, almost a prophecy, with a dash of hubris. For example:

I may not share the ideology of Wolfenhords or other bands of this type, but I have always found their relationship to metal music fascinating. I also support the right of individuals to freedom of expression, and I find political correctness and though policing both Orwellian and frightening. Together this music and vision can forge a powerful weapon of expression. This isn't really news, most extreme metal deals with something or another 'shocking', whether it's gore and violence, anti-religious themes or politics. The Nobll is certainly not afraid to make bold assertions; you shouldn't be afraid to listen to them.

In the end, White Power for White People Fight! will appeal most to those who subscribe to its particular set of beliefs, but I enjoyed the album and vocal delivery enough that I can recommend it to open-minded fans of grim, stripped down black metal. This is 'bedroom' black metal, essentially, but it's a cohesive enough effort for a single man and some of his tunes rock.